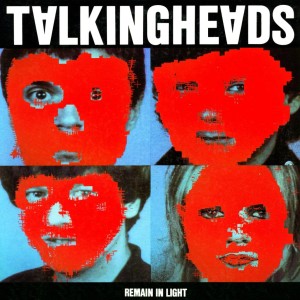 Remain in Light is the fourth studio album from Talking Heads.  It’s widely considered to be the creative high point of the band’s prolific career.  The album is an experimental merging of several genres including new wave, Afropop, and punk rock.  Co-written and produced by Brian Eno (the artist who would later go on to help bands like U2 and Coldplay explore new sounds and rejuvenate their careers), the record’s innovative collection of seemingly random loops and samples resulted in a cohesive sound that was way ahead of its time.

Let’s check out the James Turrell exhibit at LACMA.

From LACMA’s website: “James Turrell: A Retrospective explores nearly fifty years in the career of James Turrell, a key artist in the Southern California Light and Space movement of the 1960s and 70s. The exhibition includes early geometric light projections, prints and drawings, installations exploring sensory deprivation and seemingly unmodulated fields of colored light, and recent two-dimensional work with holograms.”

Sounds trippy!  There’s even a separate exhibit (sadly, already sold out) with a “Perceptual Cell,” where a single viewer lies down in a spherical chamber to experience blackness for a few minutes before being exposed to light.

A ticket for James Turrell: A Retrospective costs $27.  Tickets have already been purchased in advance, so if you sign up for this ride, you don’t have to worry about ordering one.  You will receive your LACMA ticket on the scheduled ride date.  Just don’t forget to bring cash or a check!