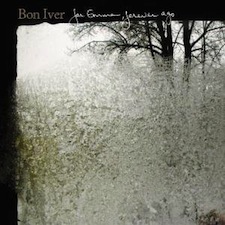 In 2005, Justin Vernon’s moderately successful band DeYarmond Edison broke up due to creative differences.  Around the same time, he and his girlfriend ended their relationship due to romantic ones.  Then he got mono.  Basically, life was a bitch.

Seeking an opportunity to hibernate, Vernon secluded himself for three months in a lonely Wisconsin cabin in the dead of winter. It was during this period of isolation that he wrote and recorded the basic tracks that would eventually comprise For Emma, Forever Ago, his debut album under the moniker Bon Iver (a bastardized version of the French phrase “Good Winter”).

The result was an album that received massive critical acclaim upon its release.  For Emma, Forever Ago was generally considered to be one of the best albums of 2008 and the decade at large.  Rolling Stone even went so far as to declare it, “One of the all-time great breakup albums.”

January is the coldest month of the year in Los Angeles.  Let’s warm up with some hot cocoa and other chocolatey treats at Chaumont Bakery & Cafe in Beverly Hills and then hibernate in our cabin on wheels.