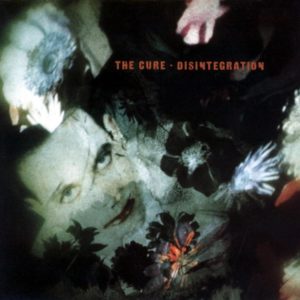 Album:
Disintegration by The Cure (1989)

“The late 1980s and early 90s were the Cure’s heyday—from an American perspective. It’s not just that they were making great music; they’d been making great music for roughly a decade already. But these were the years during which they coalesced into this whole iconic thing, the Cure—a sound, a look, and a sensibility that a few kids in every other high school could build whole identities around… A whole lot of [Disintegration]’s appeal is that it’s comforting, practically womblike—big, warm, slow, full of beauty and melody and even joy. The trick, I think, is how well it serves as a soundtrack to that feeling that everything around you is meaningful, whether it’s beautiful or horrible or sublime: This is an album for capital-R Romantics, not sulkers. It’s muscular (like on the title track), wistful (“Pictures of You”), ghostly (“Closedown”), seething (“Fascination Street”), and yeah, morose, but what’s striking is how each of those qualities can reach really, really far into your gut. It’s not a record for the dead-inside: Get far enough into this album, and I will almost guarantee you will feel some shit… ”

We’re heading back to Reign of Terror in Thousand Oaks. With over 100 rooms and 8 different themes, this award-winning haunted house attraction is one of the biggest and scariest in Southern California. If we survive, we’ll grab food and drinks after within Janss Marketplace.

Tickets to Reign of Terror are only $25 per person. You can purchase them ahead of time here (make sure you pick the right date) or at the box office on the night of the event.