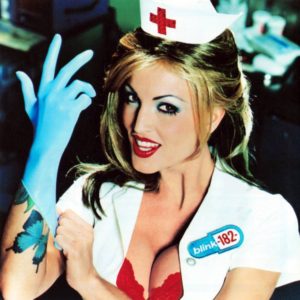 “When Enema of the State dropped via MCA in 1999, Blink-182 were nothing new. They’d been kicking around the San Diego punk scene since the early 90s and had already released two full-lengths, the most recent being 1997’s major label debut Dude Ranch. Although the Mark Trombino-produced album featured the band’s first hit single (“Dammit”), its gritty sound wasn’t too far removed from the indie releases of their early years. Enter producer Jerry Finn, known for his work with Green Day, whose expert touch brought a glistening pop sheen to the production of Enema of the State. The fact that guitarist Tom DeLonge and bassist Mark Hoppus both sounded like they’d received considerable vocal training since Dude Ranch didn’t hurt, either… And then there was the arrival of drummer Travis Barker, truly making the band a power trio. The former Aquabats drummer makes his presence felt considerably on Enema, with his breakneck-paced precision driving the catchiest batch of songs the band had ever written.”

Let’s hike to the old, abandoned Los Angeles Zoo and its surrounding areas in Griffith Park for a picnic.