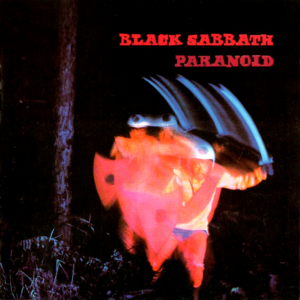 “Paranoid was not only Black Sabbath’s most popular record (it was a number one smash in the U.K., and “Paranoid” and “Iron Man” both scraped the U.S. charts despite virtually nonexistent radio play), it also stands as one of the greatest and most influential heavy metal albums of all time. Paranoid refined Black Sabbath’s signature sound — crushingly loud, minor-key dirges loosely based on heavy blues-rock — and applied it to a newly consistent set of songs with utterly memorable riffs, most of which now rank as all-time metal classics. Where the extended, multi-sectioned songs on the debut sometimes felt like aimless jams, their counterparts on Paranoid have been given focus and direction, lending an epic drama to now-standards like “War Pigs” and “Iron Man” (which sports one of the most immediately identifiable riffs in metal history). The subject matter is unrelentingly, obsessively dark, covering both supernatural/sci-fi horrors and the real-life traumas of death, war, nuclear annihilation, mental illness, drug hallucinations, and narcotic abuse. Yet Sabbath makes it totally convincing, thanks to the crawling, muddled bleakness and bad-trip depression evoked so frighteningly well by their music… Monolithic and primally powerful, Paranoid defined the sound and style of heavy metal more than any other record in rock history.”

In the mood for a good scare? Let’s try our best to survive Reign of Terror in Thousand Oaks. With over 100 rooms and 8 different themes, this award-winning haunted house attraction is one of the biggest and scariest in Southern California. We’ll also grab dinner at a group-determined restaurant within Janss Marketplace.

Tickets for Reign of Terror have been pre-purchased. They will cost each rider $27.50.