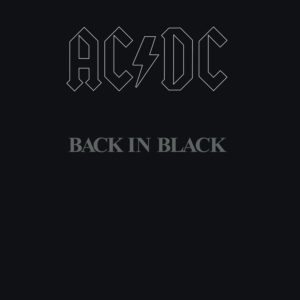 “Literally thousands of bands have talked about making an album like Back in Black — a singular blast of red-blooded, riff-driven rock & roll — but only AC/DC have succeeded so wildly. In February 1980, just after the Aussie fivesome had broken stateside with 1979’s Highway to Hell, singer Bon Scott choked on his own vomit in the back of a car. The band initially returned to the studio as a form of therapy, but six weeks after Scott’s death, it had found a replacement and soon after hopped a plane to the Bahamas to begin recording. If AC/DC were beset by sadness or uncertainty about how to proceed, they kept it to themselves… Back in Black is the rare classic record that actually sounds timeless. Synergistically soused brothers Angus and Malcolm Young conceived the songs’ riffs first, defining each track with adrenalized blues blurts so archetypal that the sheet music ought to be chiseled on stone tablets… Scott’s replacement, Brian Johnson — who, appropriately enough, was toiling on an auto assembly line in England when he was called in for an audition — worked the grooves like a street brawler on jukebox shout-alongs such as “You Shook Me All Night Long,” “Hells Bells” and the defiant title cut… Back in Black marked AC/DC’s artistic peak, but how couldn’t it? You could spend a lifetime trying to imitate music this perfectly simple.”

Let’s head to Racer’s Edge in Burbank for some black light go-kart racing.  The website describes the experience as “like you’re in The Fast and Furious, going through a Mario Kart adventure or riding through a lit up city at night.” They had me at Mario Kart.