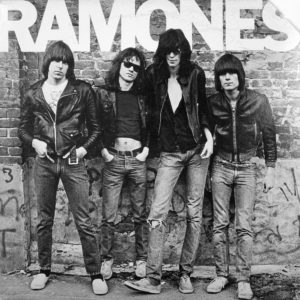 Excerpt from a 1976 Rolling Stone review:

“The Ramones are authentic American primitives whose work has to be heard to be understood. Heard, not read about or synopsized. Their first album, Ramones, is constructed almost entirely of rhythm tracks of an exhilarating intensity rock & roll has not experienced since its earliest days. The Ramones’ lyrics are so compressed that there is no room for even one establishing atmosphere verse or one dramatically irrelevant guitar solo in which the musicians could suggest an everyday existence…. The Ramones’ ideas are undoubtedly too broad and oversimplified for any serious analysis, but it is the artistic force with which their ideas are expressed that makes their music so fascinating.”