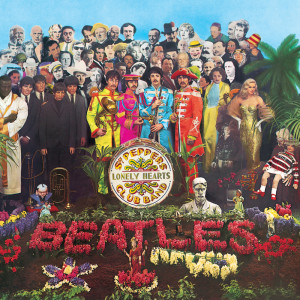 “Finally free of touring, the Beatles next sought to be free of themselves, hitting on the rather daft concept of recording as an alias band.  The idea held for all of two songs, one coda, and one album sleeve, but was retained as the central organizing and marketing feature of the band’s 1967 album Sgt. Pepper’s Lonely Hearts Club Band.  Hailed on its release as proof that popular music could be as rich an artistic pursuit as more high-minded media such as jazz and classical, the record’s reputation and sense of ambition ushered in the album era.  Its influence was so pervasive and so instructional regarding the way music is crafted and sold to the public that this is still the predominant means of organizing, distributing, and promoting new music four decades later, well after the decline of physical media.”

Let’s spend the day at Santa Anita Park, a thoroughbred racetrack in Arcadia.  We’ll eat, drink, and root for specific horses to run faster than other horses.

A ticket for Santa Anita Park costs $10. Tickets have already been purchased in advance, so if you sign up for this ride, you don’t have to worry about ordering one. You will receive your ticket on the scheduled ride date.  Just don’t forget to bring cash!  You may want money on hand for betting on races and purchasing food and drink.