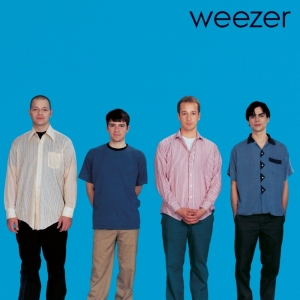 “At the time of its release, [Weezer’s] influences were discussed endlessly — the dynamics of the Pixies, the polished production reminiscent of Nevermind, the willful outsider vibe borrowed from indie rock — but few noted how the group, under the direction of singer/songwriter Rivers Cuomo, synthesized alt-rock with a strong ’70s trash-rock predilection and an unwitting gift for power pop, resulting in something quite distinctive. Although the group wears its influences on its sleeve, Weezer pulls it together in a strikingly original fashion, thanks to Cuomo’s urgent melodicism, a fondness for heavy, heavy guitars, a sly sense of humor, and damaged vulnerability, all driven home at a maximum volume. While contemporaries like Pavement were willfully, even gleefully obscure, and skewed toward a more selective audience, Weezer’s insecurities were laid bare, and the band’s pop culture obsessions tended to be universal, not exclusive. Plus, Cuomo wrote killer hooks and had a band that rocked hard — albeit in an uptight, nerdy fashion — winding up with direct, immediate music that connects on more than one level. ”

Let’s nerd out at EightyTwo in the Arts District, a barcade featuring over 40 classic arcade and pinball machines from the 1970s thru the 1990s.  Thrillist included it on their list of the Best New LA Bar Openings of 2014.