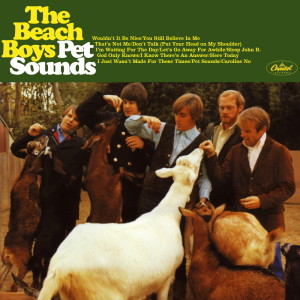 From All Music Guide:

“The best Beach Boys album, and one of the best of the 1960s. The group here reached a whole new level in terms of both composition and production, layering tracks upon tracks of vocals and instruments to create a richly symphonic sound. Conventional keyboards and guitars were combined with exotic touches of orchestrated strings, bicycle bells, buzzing organs, harpsichords, flutes, Theremin, Hawaiian-sounding string instruments, Coca-Cola cans, barking dogs, and more. It wouldn’t have been a classic without great songs, and this has some of the group’s most stunning melodies, as well as lyrical themes which evoke both the intensity of newly born love affairs and the disappointment of failed romance (add in some general statements about loss of innocence and modern-day confusion as well).”

Pet Sounds is widely considered to be one the greatest albums of all time.  Rolling Stone ranked it #2 on their list of the Top 500 Albums of All Time.  Ironically, Pet Sounds was recorded after Brian Wilson heard Revolver by the Beatles, the album ranked #3 on the same list, and set out to try and top it.  Later, Paul McCartney conceded that Sgt. Pepper’s Lonely Hearts Club Band, the #1 ranked album on the same list, was a creative response to Pet Sounds.  Hey, there’s nothing quite like healthy competition.

Let’s grab lunch downtown at Water Grill, one of the best seafood restaurants in all of Los Angeles.