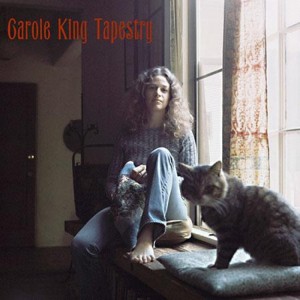 Carole King started her music career as a teenager in the 60s, penning hit singles with then-husband Gerry Goffin for artists like the Shirelles, Bobby Vee and the Everly Brothers.  After her divorce from Goffin in the late 60s, King moved to Laurel Canyon and released her first solo album, 1970’s Writer, with James Taylor performing guitar and background vocals.  The album drew modest attention, but it wasn’t a hit.

Tapestry, King’s second record, is a definitive snapshot of its time and one of the best recordings of the 70s.  It turned King into a cultural icon and cemented her legacy as one of the 20th century’s most vital songwriters.  In 1972, King became the first female artist to win all three of the major Grammy awards in a single ceremony – Record, Song, and Album of the Year.  For a quarter century, the album remained the highest selling record by a female recording artist of all time.  In 2003, Rolling Stone listed Tapestry at #36 on their list of the Top 500 Albums of All Time.

Let’s hike up to the Parker Mesa Overlook and have a picnic.  Located in the Santa Monica Mountains, the site offers one of the most expansive and beautiful views of the Pacific coastline.

Entrance to the hiking trail is free.  The hike is about 6 miles altogether starting from Topanga State Park.  Most of the trail is unprotected from the sun.  Comfortable shoes, sunscreen, sunglasses, and an ample water supply are highly recommended.